Dedicated to G.R. Ransleben who was attached to the 87th Air Service Group.

All of the items on this page were donated by him (except where noted). 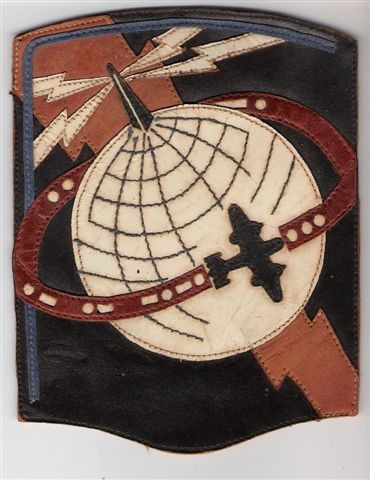 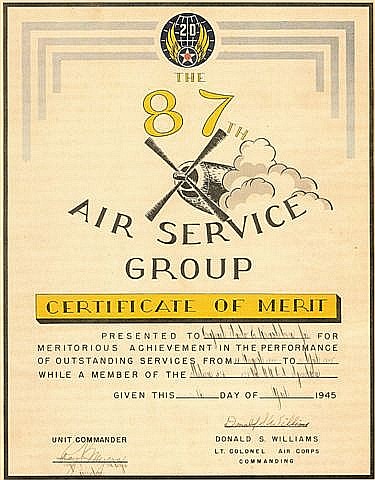 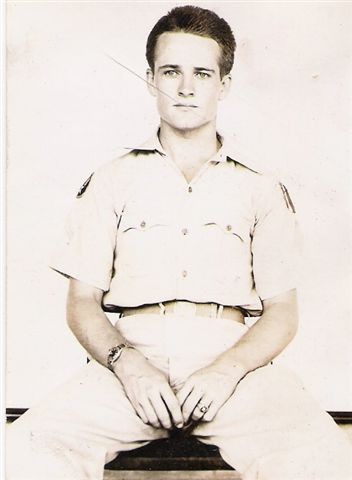 This is the 1945 annual mug shot required to maintain my top secret crypto clearance- Age 19 at the time. 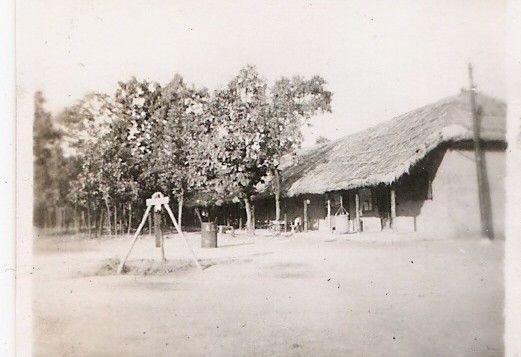 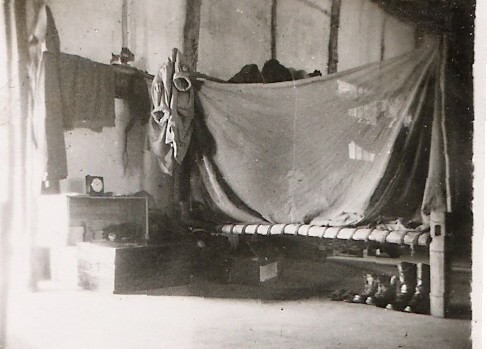 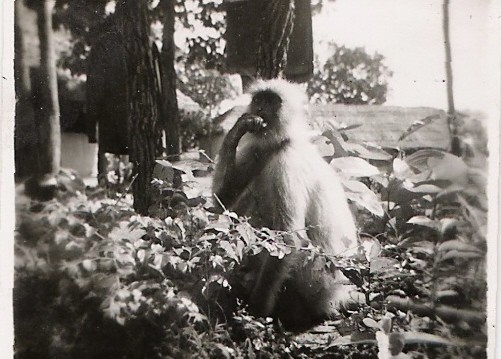 “Jocko” hung around looking for handouts and beer. 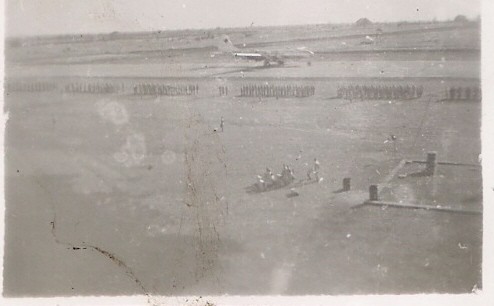 A view from the control tower during a review held on November 15, 1944.  General LeMay was there to present several medals to deserving airmen. 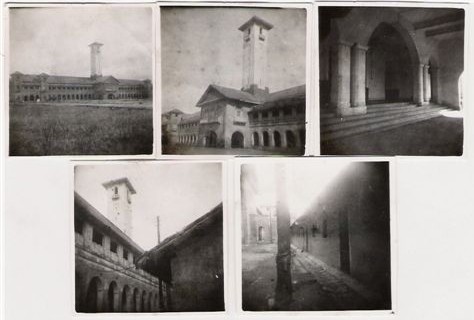 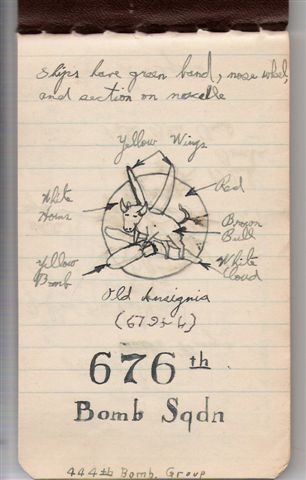 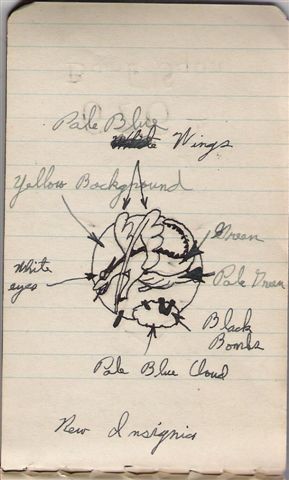 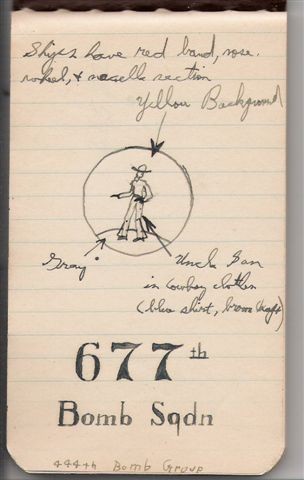 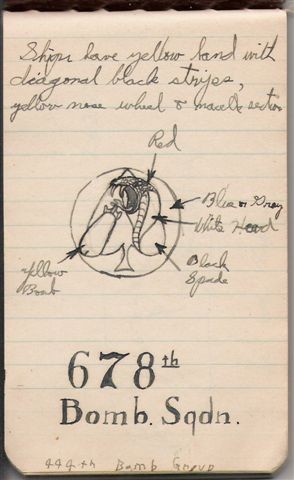 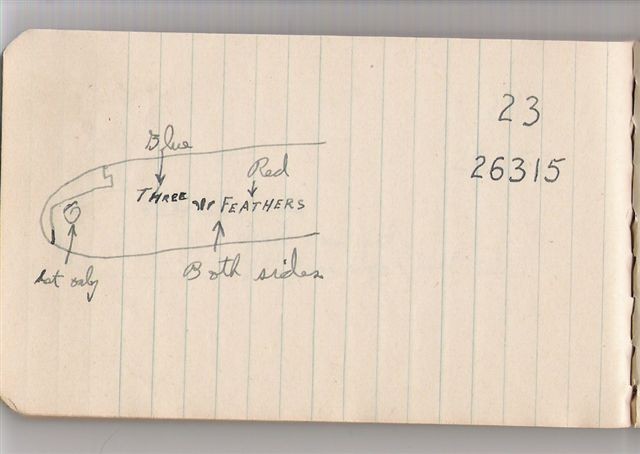 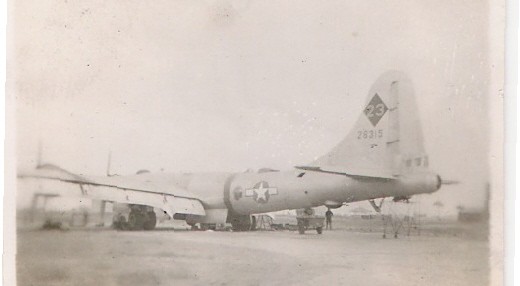 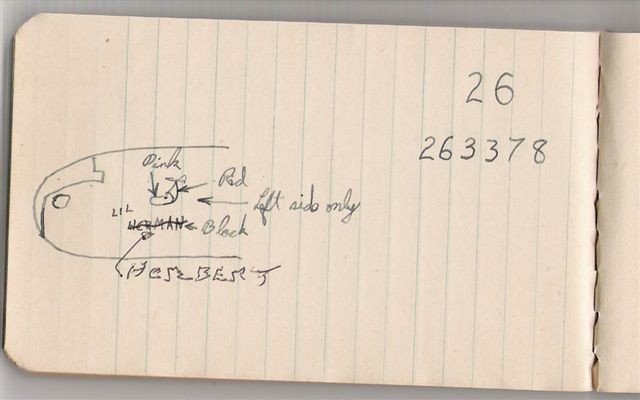 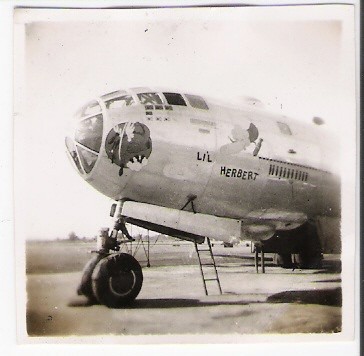 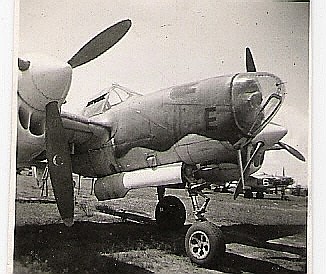 The Droop Snoot was a P-38 modified with a plastic nose and provided with accommodations for a bomb sight and bombardier. This plane flew the lead when the P-38's made bomb runs. When the bombardier dropped his bombs, everyone else dropped theirs. I have been told the concept had mixed results. 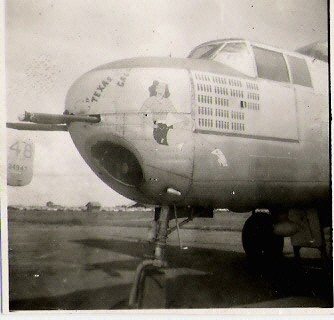 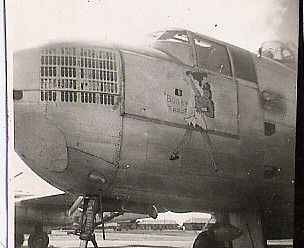 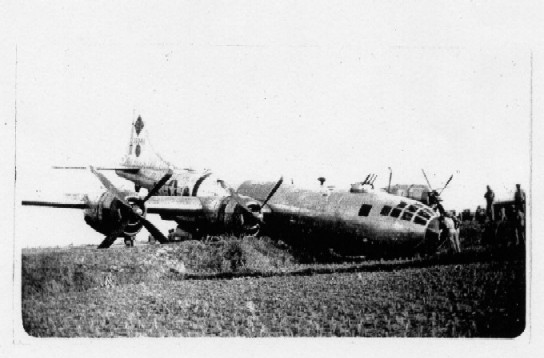 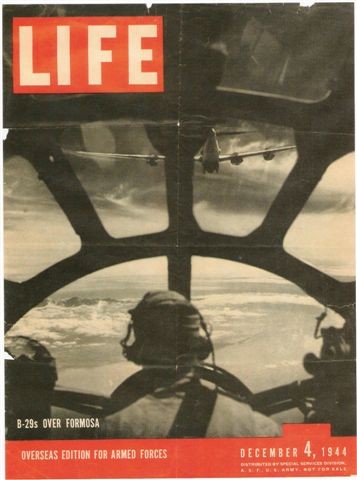 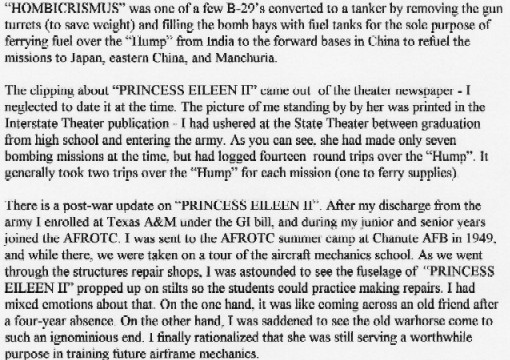 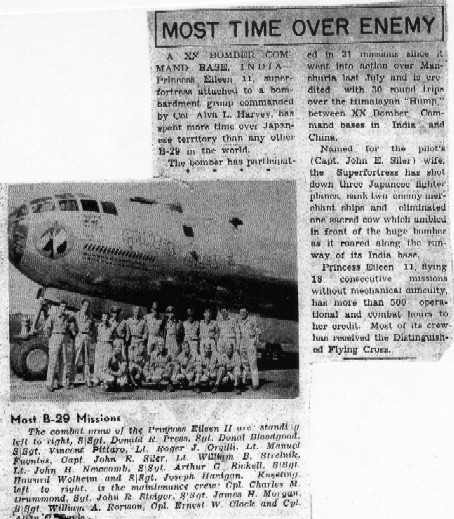 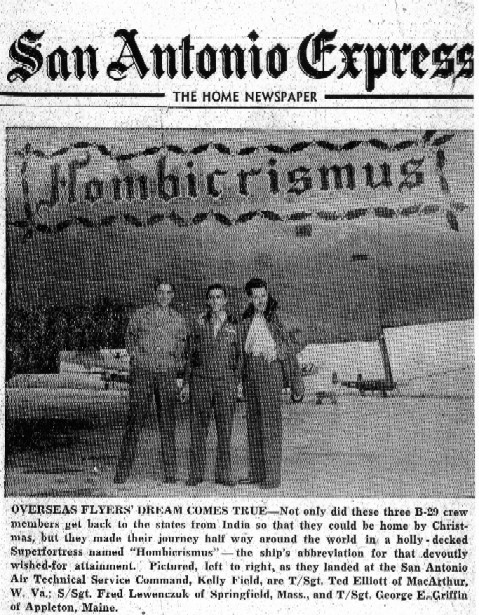 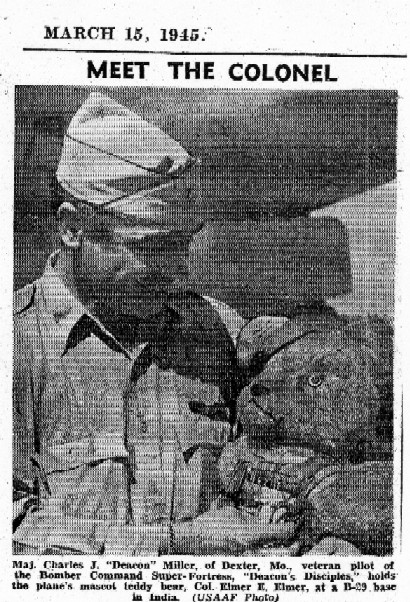 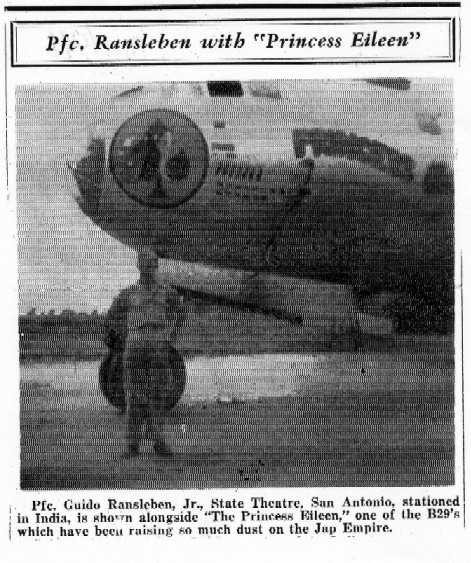 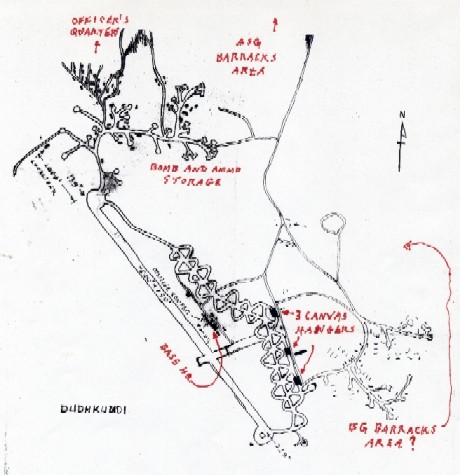 During the past sixty-one years, I had wondered about the locations of some of the XXBC bases in . I was familiar with the Hijli headquarters of the Bomber Command, along with the bases at Kharagpur (Salua), Kalaikunda, and Dudhkundi, because I had been to those places while stationed in the area. All I knew about Chakulia and Piardoba was that they were further up the road. Although I was stationed at Dudhkundi only two months after the 444th BG moved there from Charra, I had never heard of Charra until I became a member of the 444th BG Assn. a few years ago. No one ever mentioned it while I was there, to the best of my memory.

When I found out about Google Earth a few months ago, I downloaded it to see if I could locate the runways of the bases. Google Earth is great if you know where to look, especially in the less densely populated rural areas. In those areas, the image resolution is not good enough to resolve individual roof tops, but runways can be seen. I found Chakulia, because it is actually labeled by Google Earth. I found some other runways while scrolling through the area, but did not know what they were.

At that point, I posted some inquiries to see if anyone had a map of the base locations which would give me a clue as to where to look. I had two responses. One, from Katie Kirk, gave me a great description of Charra, and I found it right away. The other was from John Icenhower (the contact for the 462nd BG web site), who e-mailed a map showing all the bases in the area. This led me to Piardoba and named all the other area bases.

I found that the web site for the Indian Institute of Technology, which sprang up after the war around the building used as headquarters by the XXBC, had a map of the campus, which shows the old building. It is now a museum, housing artifacts and memorabilia from the pre-independence British oppression. I found enough large landmarks on the campus map to locate the building on Google Earth.

The map sent by John Icenhower shows an airbase located roughly half-way between Salua and Kalaikunda, labeled 22nd Air Depot. I know from another site that there was a 22nd Air Depot unit somewhere in the Kharagpur area, but scrolling through that whole area on Google Earth doesnt reveal anything to indicate the presence of anything resembling such a base. I never heard of it while I was there. There is something on Google Earth at about 12 miles north of Midnapore (half way to Piardoba) which looks like it could be two intersecting runways with parking areas at the far end of each.

The map I e-mailed to you was generated from measurements on Google Earth.

A website named Warbirds of India () states that the Indian Air Force has closed down all the area military airbases except those at Kalaikunda and Panagarh. A pop-up at Chakulia indicates that the base there is still used commercially.

It was interesting to me to find an isolated runway near Bishnupur. I believe this was where I once landed by mistake. In late 1945, after I had been transferred to Barrackpore, on the north edge of , I had a few days off so decided to visit some of my friends who were still at Dudhkundi. I boarded a C-47 shuttle flight which made a regular round from Barrackpore to some of the former XXBC bases. The first stop was to be Piardoba, but about half-way there the plane collided with one of the large Indian vultures. There was a loud crashing sound, and the whole airplane shuddered. Looking out the window, I saw a large dent in the leading edge of the wing, a red sploch extending over the top surface, and a single black feather sticking out of the edge of the de-icer boot. The pilot decided to make a straight-in approach to Piardoba, in order to land quickly and assess the damage. He had never flown that route, and was unfamiliar with Piardoba, so as he began the descent all I could see ahead of us was a single strip completely surrounded by jungle, which I knew could not be Piardoba. When we landed, there were no buildings, aircraft, vehicles, or humans in sight, except for a lone Indian sentry standing next to the runway with his mouth agape. The pilot contacted the Piardoba tower and was informed that we had landed at an abandoned British fighter strip. He was given directions to Piardoba, and we were there after a short hop. I dont know how he managed to get 17 miles off course on a 70-mile flight, but he may have become disoriented after the bird strike and picked the first runway he saw.

Regards to all --- Guido

Bombs on the Runway

This is a story I have been itching to tell for years, but have hesitated because I never knew the true facts of what led up to it. All I know for sure is what I saw. That much can be verified by the hundreds of people who witnessed the incident and may still be around to talk about it. I never recorded the date or the S/N of the airplane involved, but it must have happened in early 1945.

The 444th had been on an all-­day mission directly from Dudhkundi, and when the time neared for their return, a large crowd gathered in front of the headquarters building to watch them land. I was standing in front of the message center (next door to HQ). Two officers and two women (from the distance, I couldnt tell if they were nurses or canteen workers) had taken a jeep and drove right up to the edge of the runway for a better view as the planes rolled by.

The first indication I had that something was wrong was when the people in the jeep suddenly jumped out and started running as fast as they could, without bothering to try to start the jeep. Then I noticed that the plane that had just touched down had a couple of objects bouncing up and down on the runway beneath it.

The mind can assume strange ideas about anything unusual it sees. My first impression was that he plane may have landed short and snagged a fence, and was dragging a couple of fence posts by the wire. But, in the same instant, I remembered there were no fences in the area and what I saw was two bombs hanging on by their arming wires while they were being dragged down the runway.

At about that time, I became aware that most of the crowd had disappeared. I just stood there with my mouth hanging open. The two bombs hung on for about half the length of the runway (about even with the point where I was standing), before they finally came loose. They were just lying there until the bomb crew drove out to pick them up.

As I said at the beginning, I never really knew what led up to this incident, One story I heard was that when the bombardier released the bombs, he was not aware the bomb bay doors had jammed shut, and the bombs were just lying on the doors until the plane touched down. The doors then popped open, dumping the bombs on the end of the runway (except for the two that hung on).

This incident could have been disastrous, but no one, to my knowledge, was hurt. All I know is that the images of the bouncing bombs and the people running from the jeep were forever etched in my memory.