Born in Nfld. 2/2/22,  and moved to Mass. in late summer of '25. I grew up in Lynn, Mass. and was an apprentice tool and die maker with GE there. I requested that they stop obtaining deferments for me in the fall of '42. So, I got drafted and was lucky to get into the Army Air Corps. After going to gun turret school at Lowery AFB near Denver,  I continued in Power Turret Central Fire Control maintenance school at Lowery.  Upon graduation, most us were to become top gunners in B-29s. When a request came into the office where I was working while awaiting assignment in Salina, KS. for a top gunner to go to Great Bend, KS. I asked to be the one to go. When I got there I found that there was no top gunner position open and I was offered a tailgunner's spot temporarily if I wanted to go overseas with the Group. So that's how I, a 6-footer, got into the tail spot. 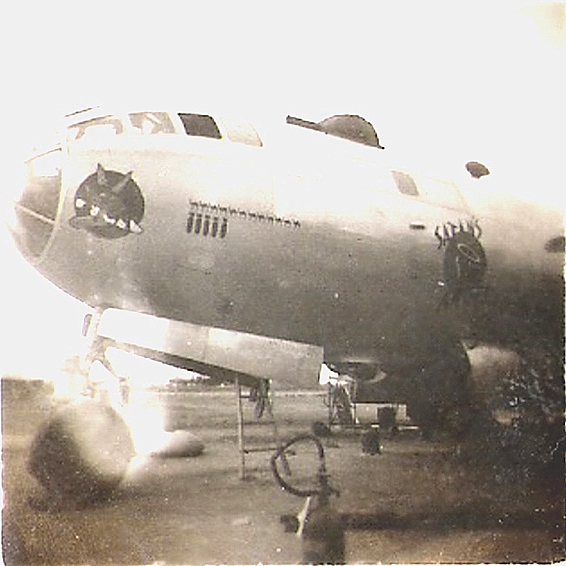 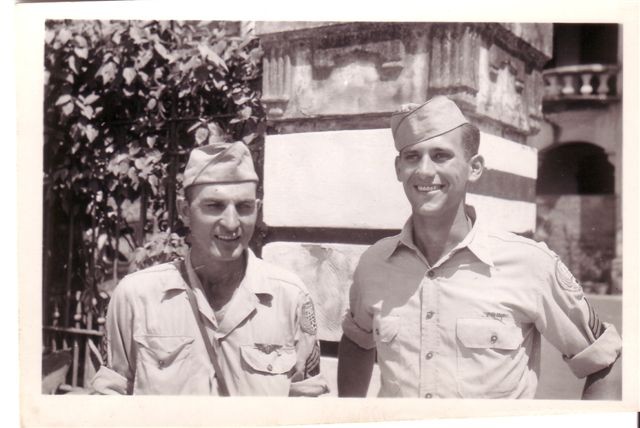 Myself and Glen Raker, our top gunner 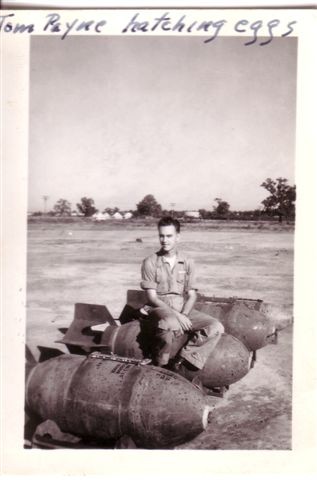 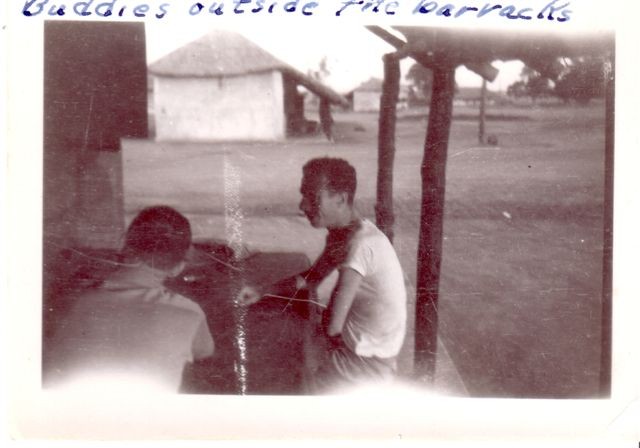 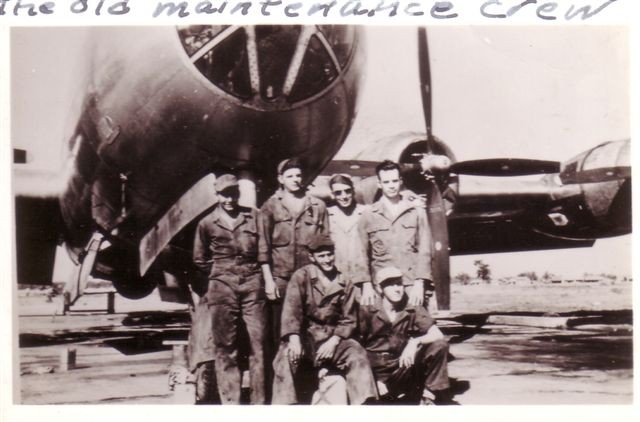 Old maintenance crew in front of Satan's Angel,  but I don't know any of their names 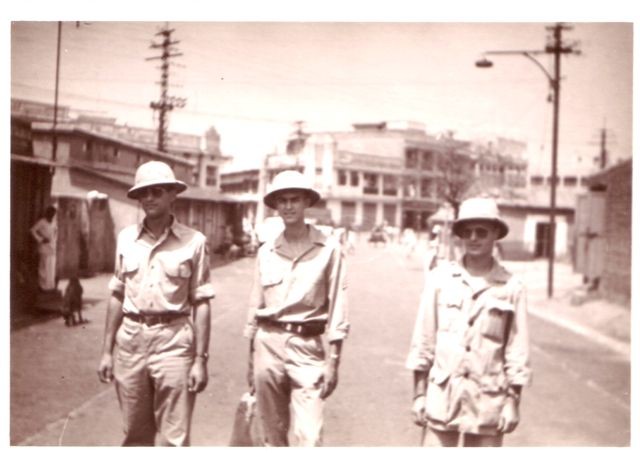 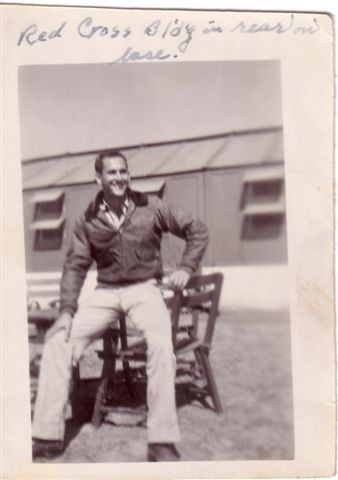 Don at Red Cross Building on Base 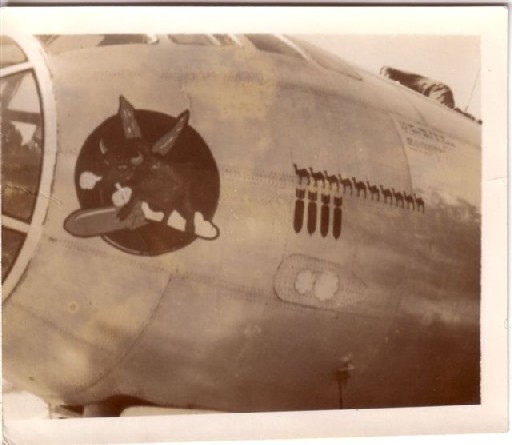 This one showing the insignia also displays the bombing missions and the number of trips over the "Hump" which is what we called the Himalyan Mts.  Those trips involved hauling gas and bombs to China in the Chengtu Valley,  where they were accumulated until we had enough of each to make a bombing run.  The first two were to Anshan and to Mukden in Manchuria, a bit north of the Yellow River (I think),  just west of a small peninsula jutting southward. Each of those missions lasted 13 to 14 hours.  I did a lot of singing to myself back in the tail and sometimes pretended I was broadcasting a radio show.  I also did quit a bit of vomitting in a small Whitman's chocolate can I had in there for that purpose and or to urinate in.  I really needed a bigger can! 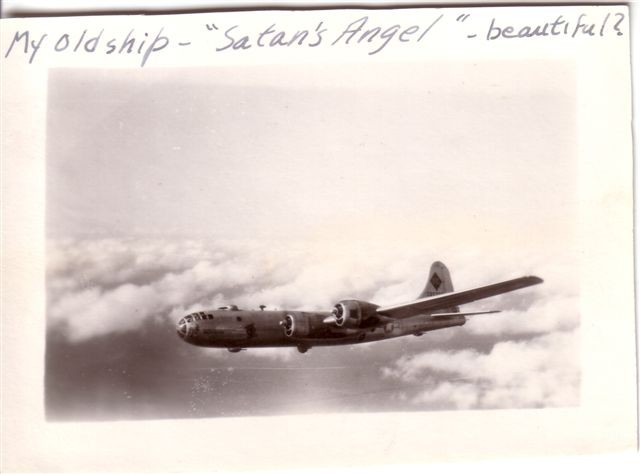 Satan's Angel over the "Hump" 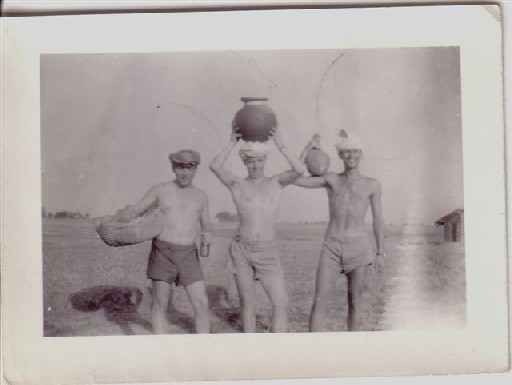 The guy on the left is B.B. Wright,  another tailgunner - I think,  but I don't recall his plane.  In the middle is Art Cody;  I don't recall what his position was in our squadron.  On the right, the ubiquitous Don Smith, aka Snuffy.  This pic. is dated,  May,  1944 - India 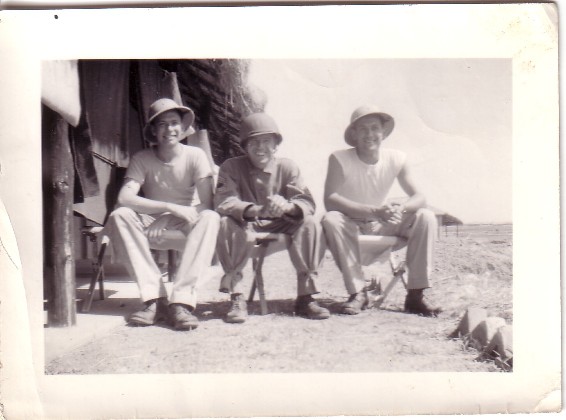 Some of us in the 444th came to India via Air Transport Command.  We arrived before the B-29s by maybe a couple of weeks.  The person on the left is Sam james,  a member of a flying crew other than mine.  Joe Uhalt was an "older" guy who worked in the squadron office.  I'm the other one there.
Often when in the chowline which was outdoors during the first weeks before moving to Dudkhundi there would be some kind of hawks flying around above us. Now and then one would swoop down and grab some food off a soldier's messkit. Also, now and then, some one would have the dubious pleasure of having a wad of cloacal fluid plop on him or on his food. One of the guys in our squadron made a slingshot and would fire stones up at the hawks. I know he got at least one of them. Called it "getting even".

Both of these pics are in India.  I'm sitting in one of the main modes of transportation in town, probably in Calcutta.  Tom Payne and I are are posed with a policeman, maybe in Calcutta. 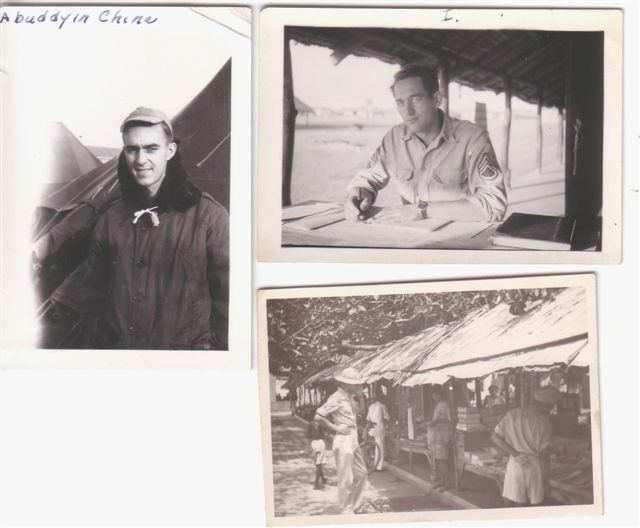 First pic is of Tom Payne, radar man outside one of our tents in China after we had brought some bombs and gas over the Hump.  The pic of the Staff Sgt.  is yours truly on the porch of my barracks in Dudkhundi, our final base in India.  We'd been at an old British airfield which wasn't quite long enough for safe take-off with a load of bombs.  Dukhundi had metal rectangles sort of tied together and laid over smoothed airstrips for the B-29s.
The third pic is of a small bazaar in a nearby town at our first base which was near Charra.
We had just about everything one would need on our final base.  There was a barbershop where we could get a haircut,  shampoo,  and coconut oil head massage for 8 annas (about 16cents),  including tip.  A shoemaker was there,  too,  and he would make mosquito boots by measuring your foot & tracing around it while one is standing on a piece of stiff paper.  The date the boots were to be ready seldom was,  and if the buyer was irate enough about the delay,  the shoemaker would have him try on some boots already made for somebody else.  The switch always led to further vituperation.
Our drinking water was in Lister bags hung from a tripod in the shade.  In heat which was often over 100 deg. the water was always warm,  and with the rubberized bag and the purifying iodine...  Well,  you can imagine how it tasted.  K-Ration lemonade powder helped mask the poor taste.
We had ration cards for beer and pop and candy bars.  Several of us chipped in and bought an icecream maker and we could get icecream mix at the PX.  With ice and rock salt we whipped up some tasty icecream,  sometimes with strawberry jam or freshly mashed bananas for flavor.  Regular flavor was vanilla...  Not too shabby. 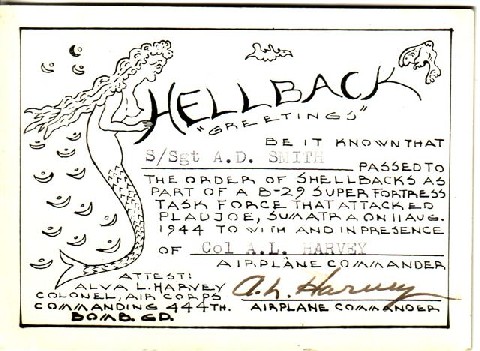 When our Group flew on a mission to Palembang,  Sumatra to bomb oil fields to show the Japanese how long our "arm" was,  we flew from Colombe, Ceylon - Crossing the equator en route.  Thus,  we all became Shellbacks and were awarded our "certificates" to attest to that. 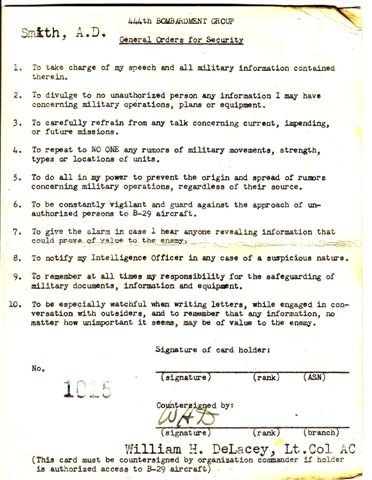 "General Orders" issued to each of us in the 676th in India.  Apparently,  I was supposed to sign it but I never did.  I think the statute of limitations has run out on this and I am safe from prosecution!
Top of page