My father, Charles J. “Charlie” Stoltz Jr. left his home town of Salamanca NY to enlist in the Army Air Corps on September 11, 1942 at the age of 19.  He spent some time at Chanute Field, Biggs Field and Keesler Field before being accepted into the College Training Detachment at the University of Arkansas.  He then went to San Antonio Texas for 5 weeks of pre-flight instruction.  After this training he was transferred to the 2530th AAF Base Unit Navigation and Instructors school based at Selman Field, Louisiana.  Here he took a 16 week course in advanced navigation and graduated in Class 45-7N.

On July 22, 1945 Dad was attached to the 444th Bombardment Group, 676th Bombardment Squadron which was already stationed at West Field, Tinian Island.  He left the US for Tinian on August 1, 1945 and arrived three days later on August 4.  He and his crew probably flew a replacement plane from the US over to Tinian by way of Hawaii and Kwajalein.

Once on Tinian, there is no record of flying activity for him until August 19th, when he flew a total of 2 hours 10 minutes.  Subsequent flights occurred on August 23, 24, and 27, and September 1.  Had the war continued, Dad and his crew would have started flying training missions with more experienced combat crews before being sent on bombing missions.  As it was, with the war declared over on August 15 the number of missions being flown dropped substantially which probably resulted in a glut of both planes and air crews.  After Aug. 15 missions were concentrated on supplying POW camps in Japan and were flown by the more experienced crews.

Dad’s records credit him with two missions, one on August 30 and the other on September 2.  The Aug. 30 mission was a practice run for the planned “show of strength” flyover of Tokyo on September 2.  The Japanese surrender was to be signed on the 2nd on the deck of the battleship Missouri, in Tokyo Harbor.  I have read that, because of its efforts in crippling Japan’s industry the 444th Bomb Group was selected to be the first to fly over Tokyo Harbor, just as the signing was taking place.  I remember Dad saying that his plane was late departing Tinian so they flew over Tokyo Bay after the signing took place. 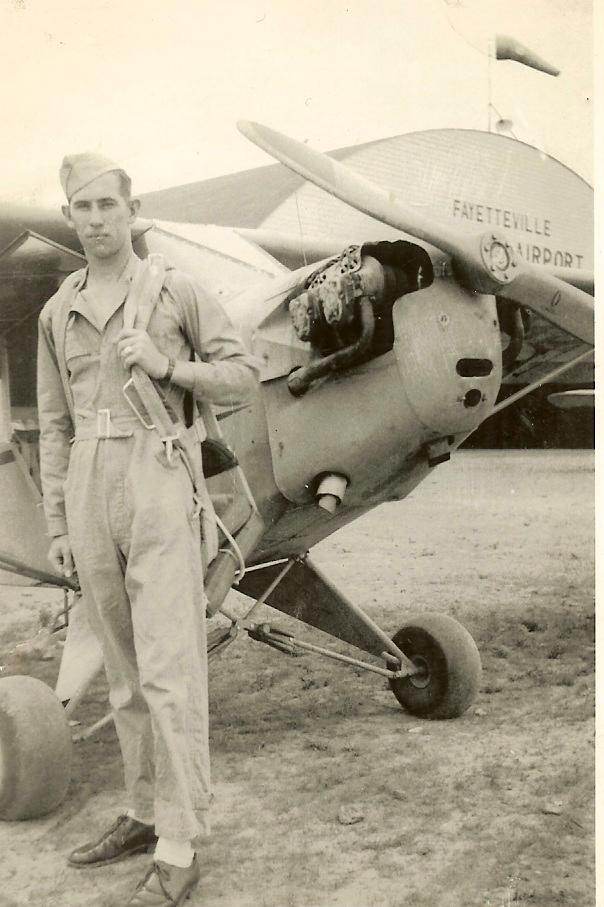 Dad at Fayetteville  probably taken in 1944 while he was in the CTD at the University of Arkansas.  In the background I believe is the white hangar which today is the home of the Arkansas Air Museum. 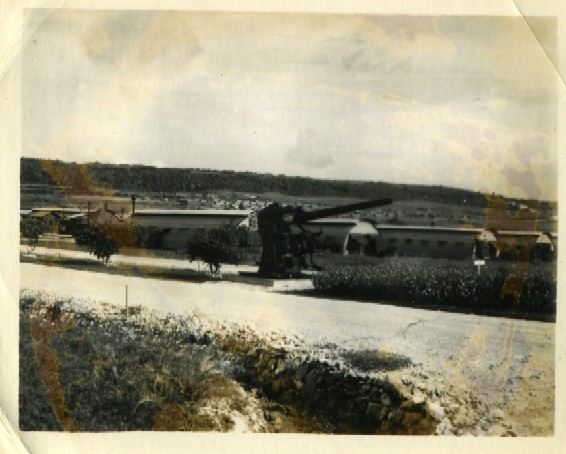 10th Seabees Base  Tinian  The cannon was made by the English and brought here from Singapore by the Japs. 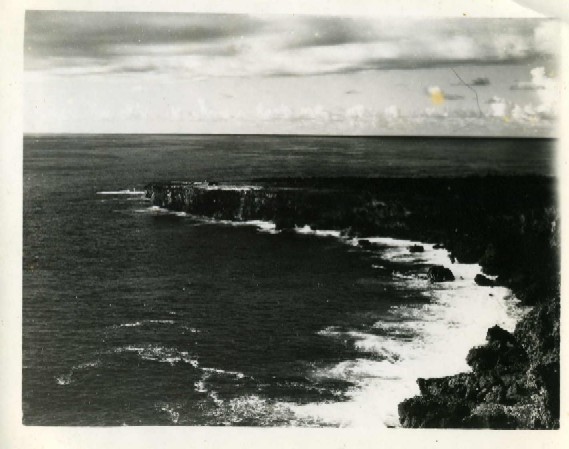 Suicide cliff  Not exactly what you would call a sandy beach is it.  Its called Suicide Cliff where many Japs committed Hari Kari. 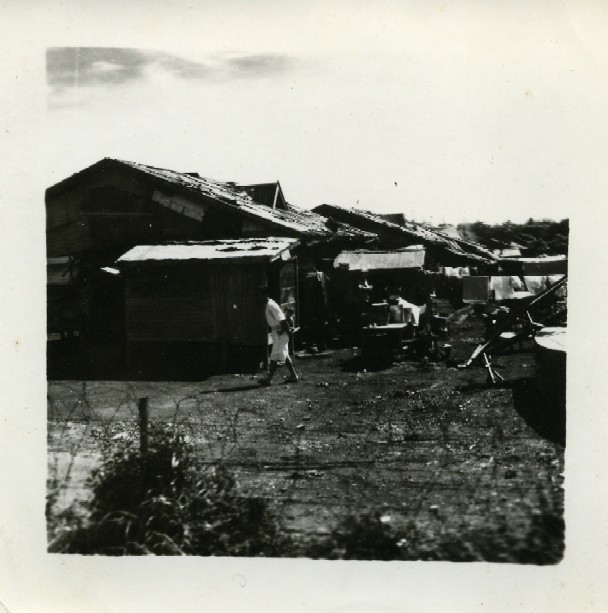 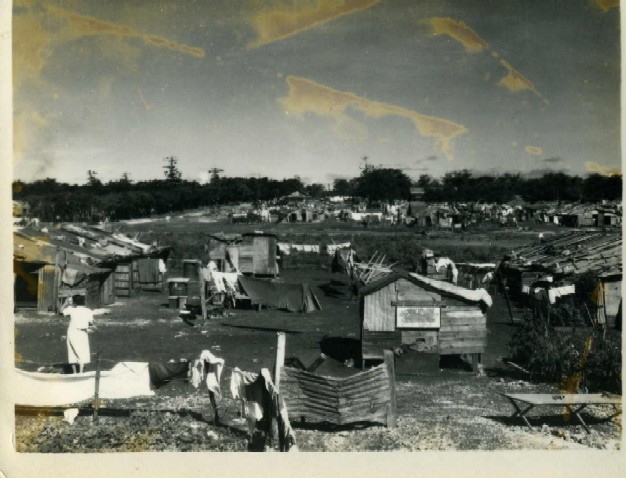 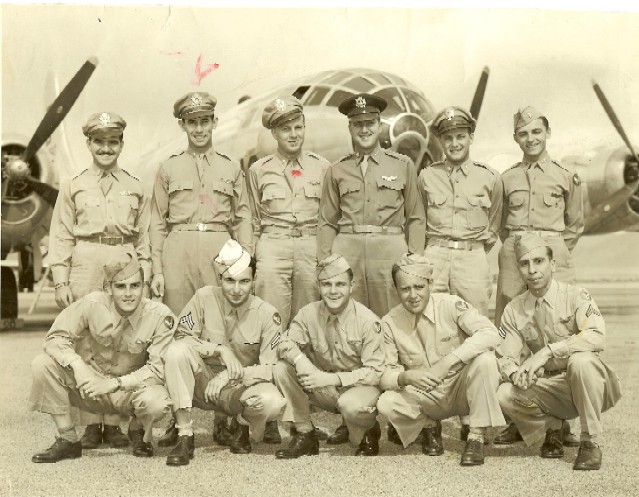 Formal crew pic  taken at Kirtland Field probably just prior to leaving for the South Pacific.  Crew members are: 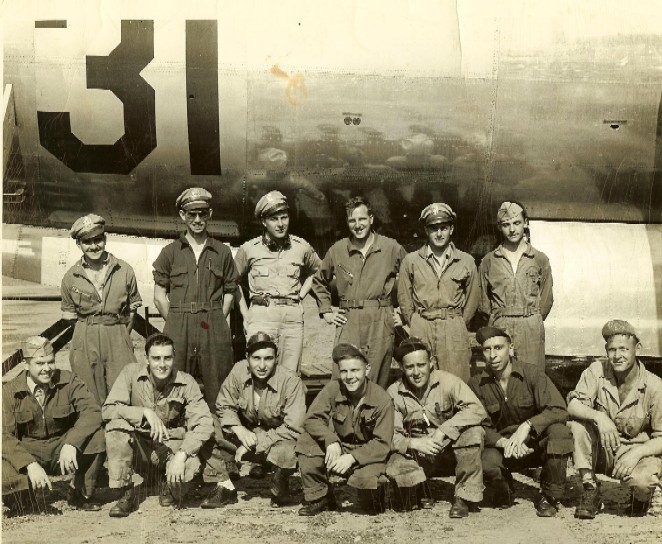 Tulsa crew photo  probably taken during a stopover during one of their cross-country training flights.  On the back Dad wrote:  The two end men kneeling in the front row are not members of our crew, but members of the ground crew of the plane we were flying.  The plane # 31 cracked up on a mountain 70 miles north of here two days after we returned from Tulsa.  Incidentally everyone bailed out O.K. and the only injuries consisted of a broken arm and a few bruises. (With the exception of the two end men crew member positions and names are the same as the formal photograph.)

Washing clothes  Cpl. Bowling either washing some clothes or making a huge pot of soup. 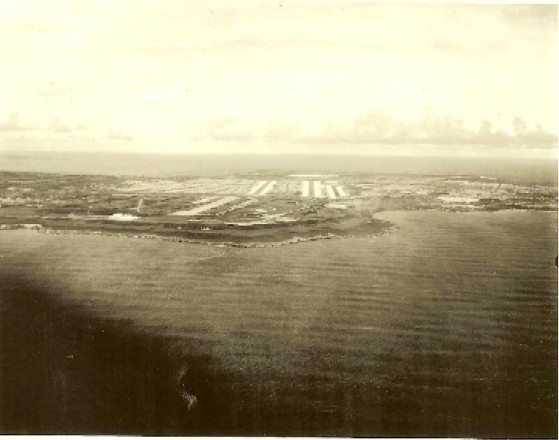 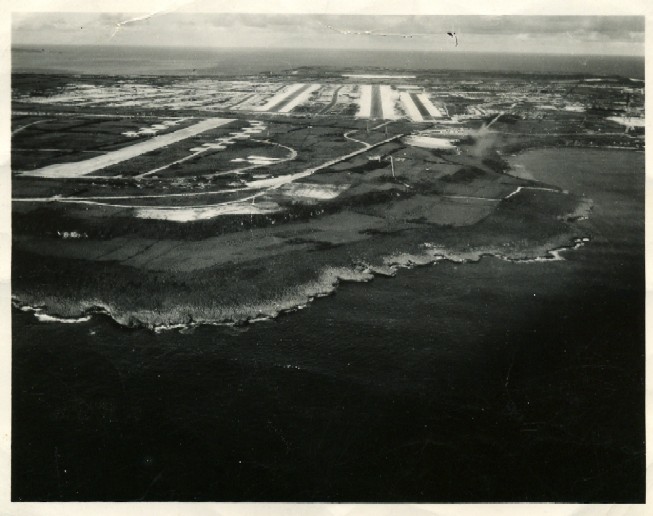 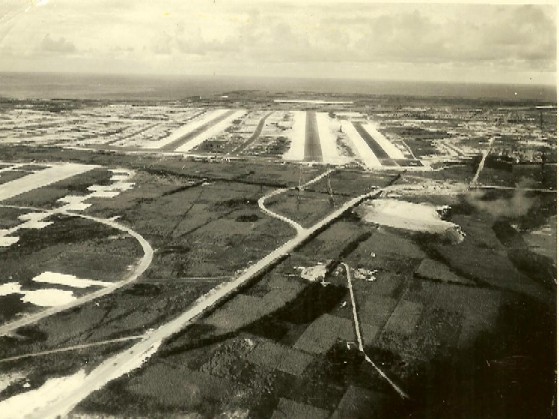 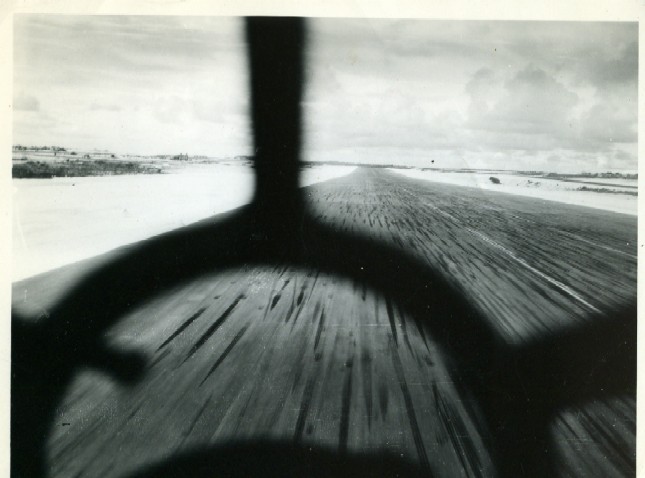 West Field Tinian  a series of photos taken from the bombardiers position while landing. 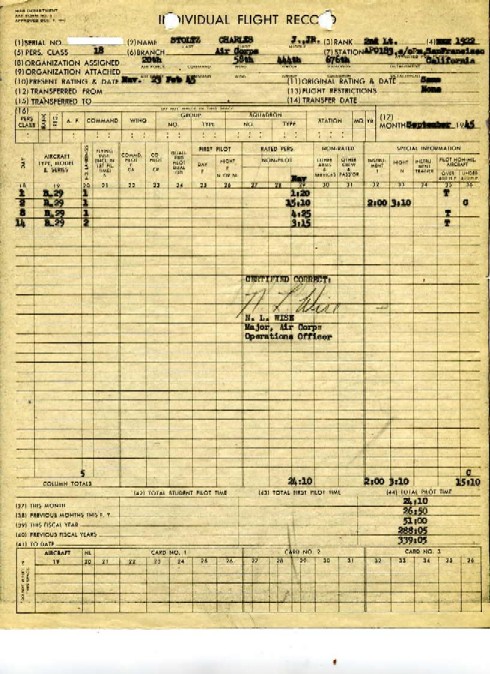 Flight record Sept 45  Dads flight record for that month showing the September 2 mission and others. 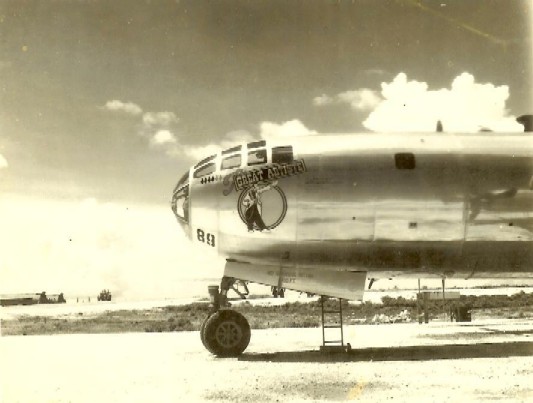 The Great Artiste  Ship that dropped second atomic bomb (there was a lot of confusion as to which plane actually dropped the bomb, and Dad wrote down the information that was viewed as correct at the time.  We now know that the planes regular crew flew Bocks Car that day).

Shrine entrance  Entrance to a Jap shrine.  The feminine interest is from a U.S.O. troupe.

Tinian ruins  Part of ruins of Tinian Town  town was entirely leveled during invasion by U.S. troops.  Some Japs were still holed up in hills in background when Japan surrendered.

In the September 2 folder there are pictures that I believe Dad took to document the day of Japans surrender.  Most of the pictures are of the same size and have the same number stamped on the back so it probably came from the same roll of film.

At the navigator position  Dad working on his charts, as seen from the flight engineers position.  I still have the dividers he was using in the picture.

Along the way  cant tell for sure but the tail markings are Triangle something  should be N for the 444th.

Looking out the bomb bay  may have been looking down through the overcast at the fleet assembled in Tokyo Harbor.

Battleships in Tokyo Harbor  one of those ships is the USS Missouri where the surrender took place.  I believe the flight was southbound on its way back to Tinian when this was taken.

Records indicate that Dad earned air time in the 444th on September 8, 14 and October 1.  On October 16 he was transferred to the 505th Bomb Group, 483rd Bomb Squadron which was another Tinian B-29 outfit stationed at the North Field.  Around this time the 444th was returned back to the United States, a much deserved and needed rest for the men and machines of the 444th.  Since Dad and his crew were new arrivals, they were probably transferred to the 505th BG as it was staying on at Tinian.

After his transfer to the 505th he continued flying in B-29s (but in only 1 or 2 missions a month) until January 1946.  Records show that he flew in B-17s on Jan. 7, 9, 10, 14, and 15.  On Jan. 8 he flew in a C-45, and a B-29 on Jan. 29.  The switch to the lighter planes may have been for his education and development, for on January 30 Dad received orders appointing him as Squadron Navigator for the 483rd.  This duty assigned him to the plane flown by the squadron leader, who somehow found it necessary to fly to such places as China and the Phillipines.

During one such flight their plane was running low on fuel and they were forced to land at an unfamiliar island.  The Squadron Commander thought that the runway was too short to handle the plane.  Dad looked down and observed two other bombers already parked on the ground and said Must have been OK for them.

On March 14, 1946 Dad left Tinian aboard the U.S.S. Breckenridge, heading back to the US and arriving on the 25th.  He was honorably discharged on April 20, 1946 at Camp Atterbury Indiana.  He went on to a career in the construction industry in the Buffalo, New York area.  He kept in touch with a couple of his crew  Lou Scharbau (pilot) and Jerome Ash (gunner) until the late 1990s.