All the Items on this page were donated by Read Vaughn, and are his personal photos and memories from his service in the CBI and on Tinian. 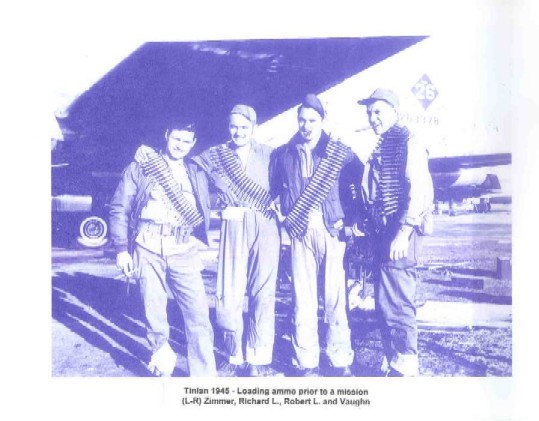 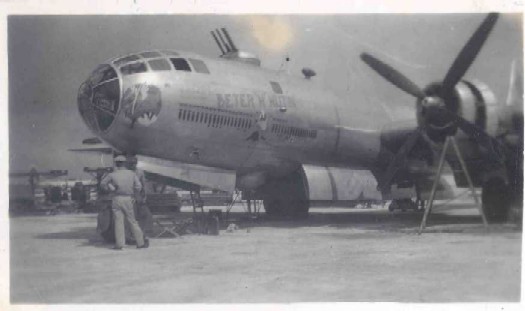 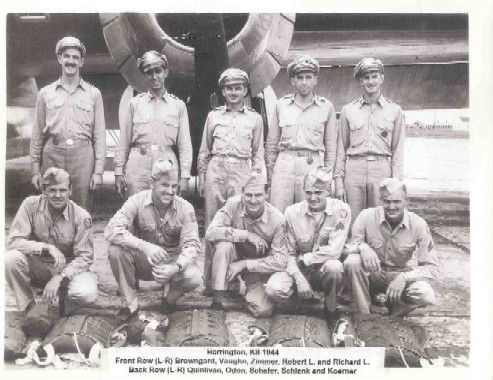 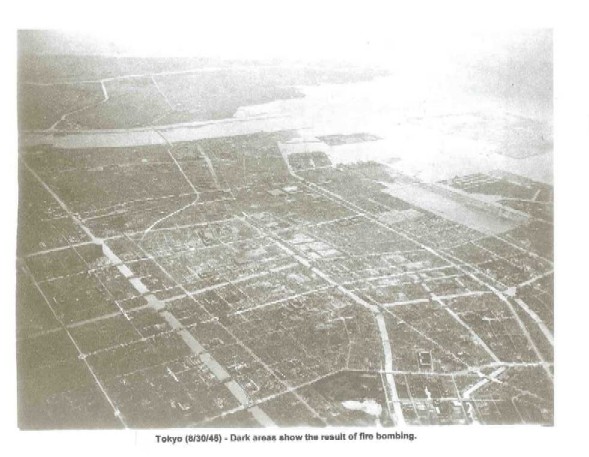 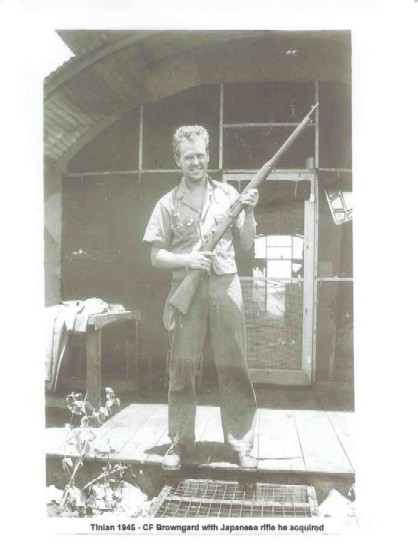 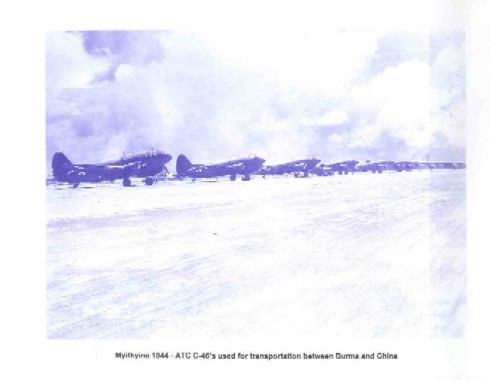 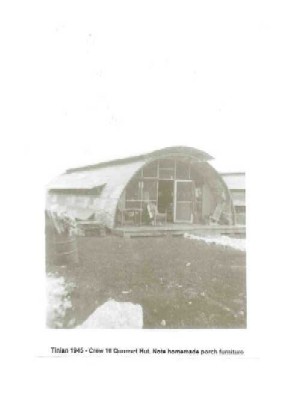 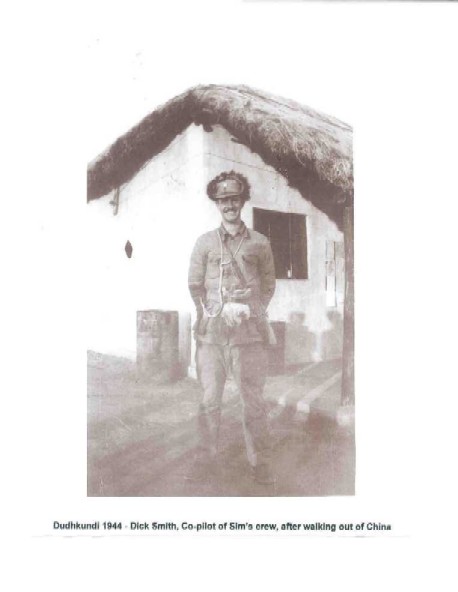 Journey to the past

Eyeing the B-29 perched at Dobbins Air Reserve base, a Japanese teacher who brought students 7,000 miles to meet an 81-year-old Marietta World War II veteran was surprised by the plane's silver color.

"My mother and other people who had survived the terrible experience told me the B-29 was red," said Fumiaki Fujimoto, 41, an English teacher in the Japanese city of Imabari.

"They only saw the stomach part of the B-29," he explained. "It looked red because of the fires on the ground."

An English teacher at a private high school in Imabari, south of Tokyo, Fumiaki brought four of his students at their own expense to meet H.R. Read Vaughn of Marietta, a B-29 radio operator in the second World War who helped to destroy Imabari in a 1945 bombing campaign, shortly before the atomic bomb was dropped on Hiroshima. Because of the lack of information about the campaign, the students are compiling their research in book form to preserve for future generations.

"Dobbins is very interesting for us because we don't have any chance to see B-29 aircraft," Fumiaki said. "This is the first time for them and also for me. We have heard a lot of stories of B-29s from the sufferers, but time passes over half century. The number of sufferers is decreasing. Maybe this is the first time and the last time to listen to the story of the attackers against Imabari, our hometown. So we have to take advantage of the opportunity as much as we can."

"How did you feel after dropping the bombs?" asked Eri Kan, 16, who speaks fluent English with an Australian accent from having lived in New Zealand for a period.

"We never knew what the casualty rate was at that point in time," Vaughn said. "I had no idea what Imabari was except a place on the map. I had no personal feelings."

Hearing that the students enjoy cafeteria food, Vaughn took them to the Piccadilly Cafeteria for lunch, followed by a tour of the "Sweet Eloise" B-29 at Dobbins, and an additional interview at his home, located near Sprayberry High School.

"I hope it's gone well," Vaughn said Thursday afternoon. "It's been good for me. It makes me think about things I haven't thought about in 60 years, for one thing, and it's good to know that some people in the younger generation have an interest in something like this, and that this won't get shelved or lost in history somewhere."

Vaughn said he was surprised by some of the questions, like when the students asked about killing Japanese people.

"I was surprised by the questions that were more of a personal nature about how I felt about things, like how I felt about the bombing of missions, etc., because we really didn't have any feelings, and I thought that was something that was understood up front, that most people didn't have any feelings. They were just missions, just a job to be done without really putting your personal spin on it," he said.

Fumiaki said he tracked Vaughn down by visiting the National Archives in Maryland last year, e-mailing him in September to request an interview for the students' massive research project.

"There is very little information on the Imabari Air Raid," Fumiaki said. "The atomic bomb, it's very special, so there are many stories about that. Enola Gay is very famous. About Imabari City, nobody knows."

So they tracked down one of the men who bombed their city to find out.

"This is the first attempt for high school kids to try something like this in Japan. Some say this is 'weird,' others say 'very special,'" Fumiaki said.

Weird or special, there was no hint of blame or anger Thursday between the American and Japanese.

Ms. Kan said she thought she would be angry with Vaughn for his actions 60 years ago.

"I was told we were going to meet a pilot, a guy who attacked our city," she said. "I wasn't nervous because he bombed our city. I was just nervous. I thought I would have anger toward someone who bombed my city. My parents grew up there and my grandparents grew up there, and I thought I would have some anger, but no, because we were the ones who really started the war. We shouldn't have bombed Pearl Harbor in the first place."

Ms. Kan's anger at Americans for killing Japanese civilians with the atomic bombs on Hiroshima and Nagasaki has subsided also, she said, after hearing Vaughn's explanation.

"I was very angry before I asked him about the atomic bombs. (Vaughn) told me if they didn't drop the atomic bombs we wouldn't have stopped the war. It would still be continuing and there would be more people dying from war, but I think there was no need for them to drop two atomic bombs. One was enough."

Her teacher, Fumiaki, said there are two Japanese schools of thought regarding the war.

"People who are very conservative say we were forced to fight because of the United States and other countries in Europe. The imperialists cut off the oil, petroleum and other national resources in South Asia and China, so Japan was confined," he said.

"The other side, the progressive side, or some other side, thinks (Japan) should not have started the war. The United States was very large and very rich. In those days, Japan was very small and very limited."

Most western historians say the Japanese were trying to build an empire, and because the country was short of natural resources, they launched an attack against America, Dutch Indonesia, British Singapore and French Vietnam.

Fumiaki said he teaches both sides of the controversy and allows his students to choose what to believe.

As for meeting Vaughn, he said he was impressed with how much the American recalled.

"It was more than 60 years ago, but Mr. Vaughn remembers a lot," Fumiaki said. "And also, he prepared for the questionnaires our students are preparing so he was very helpful."

Born in Milledgeville before his family moved to Atlanta a year later, Vaughn's father was the treasurer of the Sinclair Oil Company, while his mother was an elementary school music teacher in Atlanta.

He married Margaret Brown Vaughn in 1942 after high school, and the couple had two sons, two grandchildren and two great-grandsons. Vaughn was drafted in 1943 by the Army Air Force and trained as a radio operator, serving in the China-Burma-India Theater with a B-29 squadron.

The B-29 aircraft, 667 of which were assembled in Marietta at the Bell Bomber plant, was an upgraded B-17, pressurized so that the crew could fly without oxygen masks, and boasting a state of the art weapons system built by General Electric, Vaughn said.

The plane was armed with a dozen, 50-caliber machine guns and one 20-millimeter cannon in the tail, not to mention the bombs it carried.

"It was a fantastic system at that time," he said.

His plane flew from West Palm Beach, to Brazil to Africa, to India, where he was stationed 40 miles west of Calcutta. In April 1945, he was moved to the island of Tinian, one of the Mariana Islands where the Enola Gay was stationed, and where the bombing tactics abruptly changed. Up until that time, general purpose bombs were used to target specific sites, he said. That tactic changed to using incendiary bombs to burn the cities, largely made of wooden buildings, to the ground.

Imabari was one of many Japanese towns targeted for its cottage industries of airplane parts, he said.

"The planners determined if they were going to defeat the Japanese they would really have to burn the place down," he said.

As radio operator, Vaughn had a clear view of when the bomb bay was opened letting the bombs rain down on the target.

He was mustered out of the Army in October 1945 and went on to attend Southern Tech in the '50s, later working as a salesman for General Electric.

The information learned from Fumiaki's trip will be compiled upon their return to Japan and published in August, Fumiaki said.

The students arrived Wednesday and departed for Japan on Sunday, having visited such Atlanta attractions as the CNN Center and the World of Coca-Cola.

Absence of spin on WWII story was refreshing

Re: Monday's MDJ story, "Journey to the Past"

"Journey to the Past" was a social lesson in great forgiveness, which should be read by all Americans. These four young Japanese students traveled to the United States to meet with a man who was instrumental in wiping out their hometown of Imabari, Japan during World War II.

Although many citizens and relatives were killed, they seemed to realize that this was necessary to shorten the war.

Their teacher, Mr. Fumiaki, teaches both the conservative and progressive sides and allows the students to choose what they believe. He is to be commended.

This face-to-face meeting 60 years after the fact must have been difficult for all but highlighted reasons for each country's actions. What impressed me was that there was no blame assigned and no spin to the story. Wouldn't it be refreshing if black and white Americans, Jews and Germans and school board science parents could exhibit the same honesty and restraint? 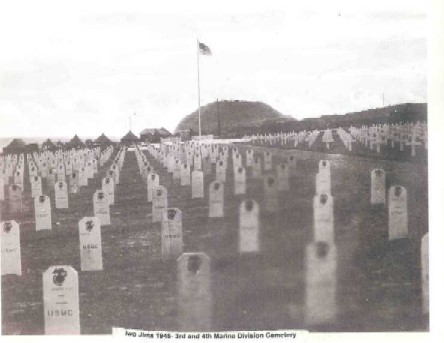 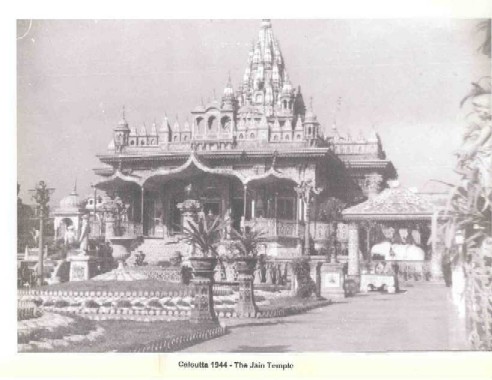 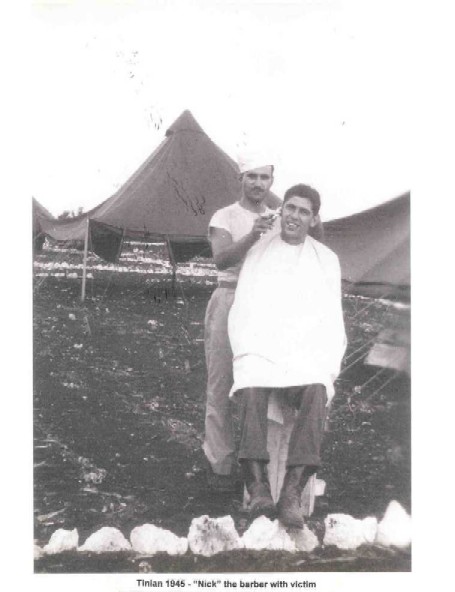 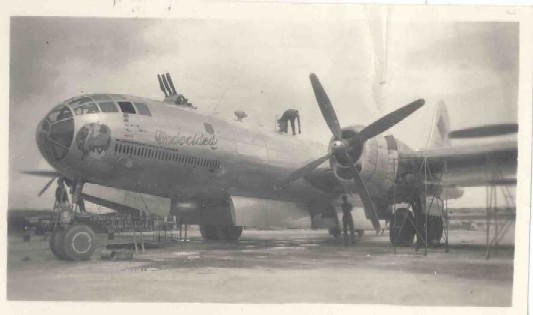 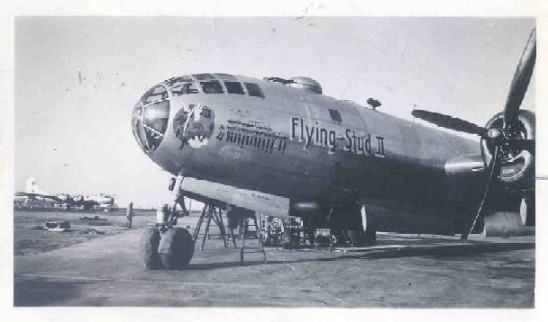 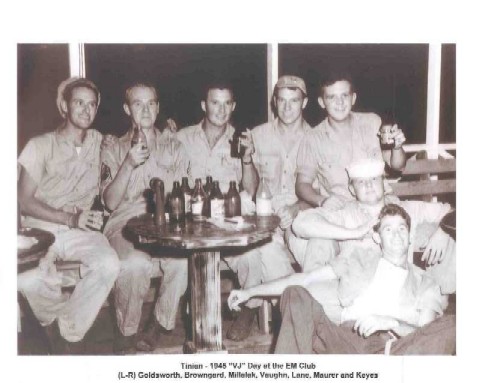 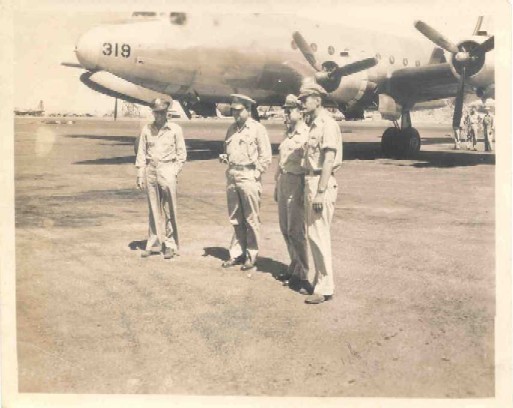 "There is a story behind the picture of Gen Lemay.  I made a midnight visit to the Photo lab one night and "borrowed" a K-20 camera and film.  A lot of the pics I took were with that camera. One day we were getting ready to fly and were on the flight line when this C-54 landed. There was a lot of excitement but I did not know why?  All of a sudden it became obvious as Gen.Lemay stepped off the plane. There were a bunch of official photographers shooting pics so I just walked up as though I was "official" and took a few pics of my own.  Heck..........nothing ventured, nothing gained! A little later on I was "encouraged" to return the camera.............or else!" 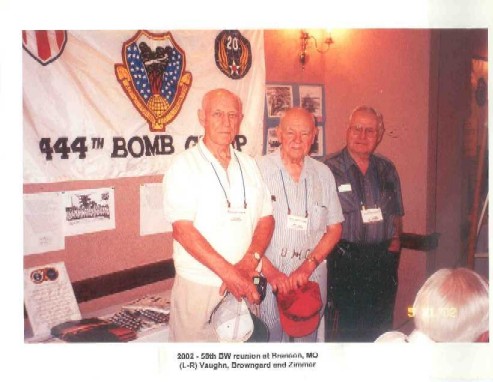 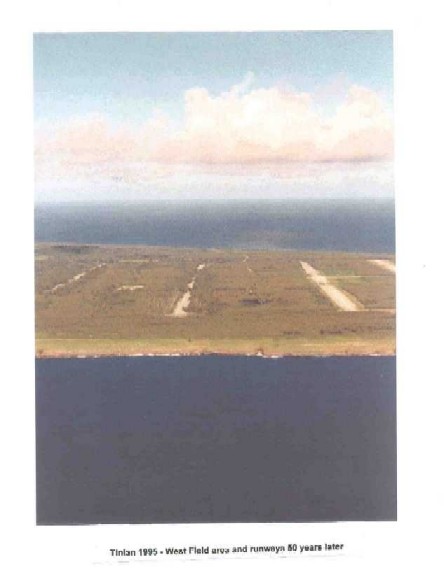 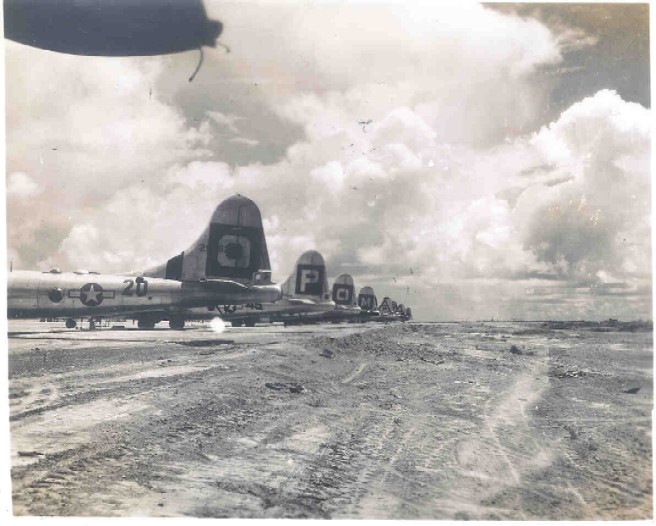 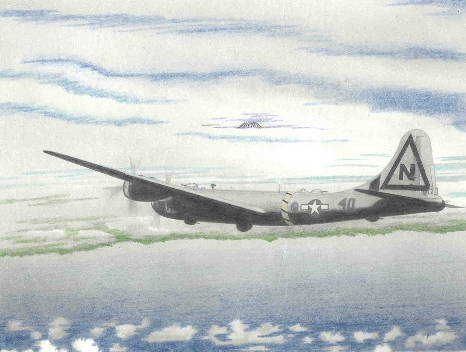 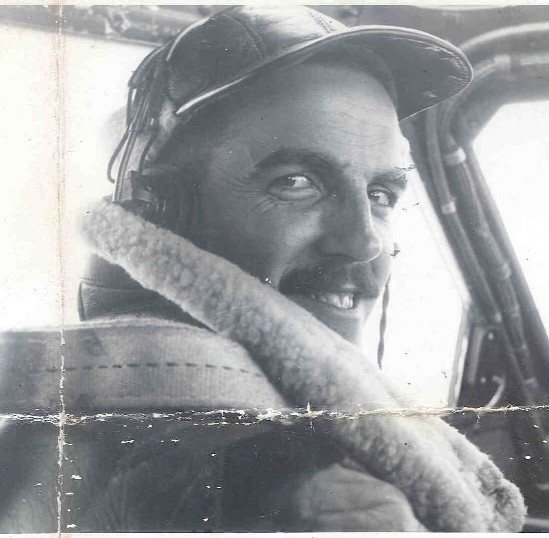 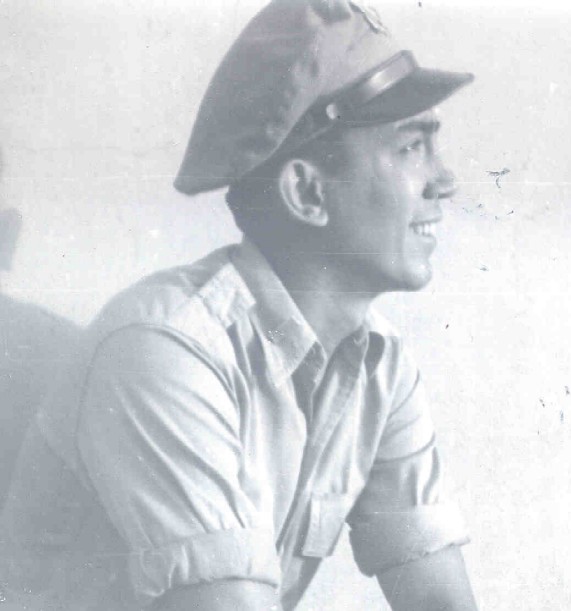 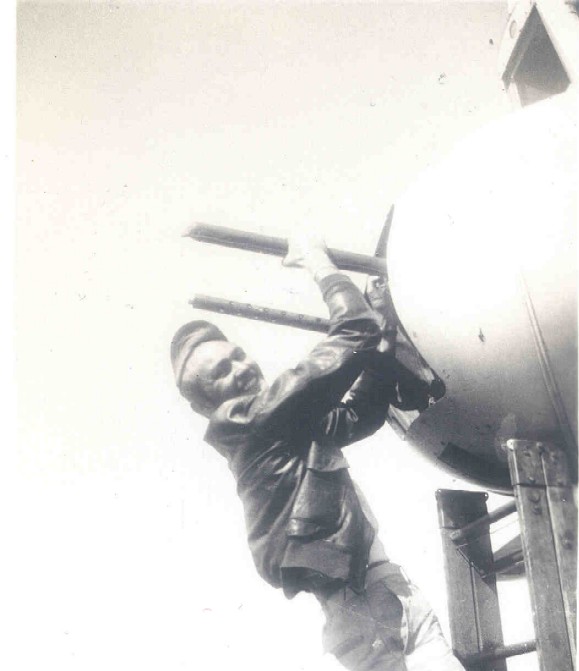 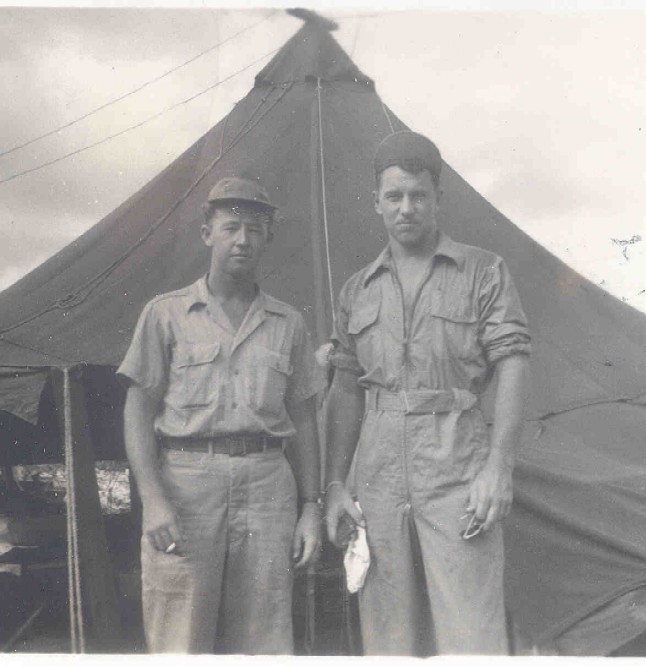 Someone was here before us!